Actually an ancient form of Headwear, The Phrygian Cap was developed from the Greek Phrygian Helmet, worn by Greek soldiers in the 3rd Century BC. The style developed into a cloth cap (green) worn by emancipated Roman Slaves. In time, The Phrygian Cap would evolve into a type of headgear worn in Eastern Europe by Commoners in the 13th Century. The shape retained the same characteristic shape of a cone, tapering to a flanged top. Early versions featured no side flaps (as did the original helmets). The Cap covered the entirety of the head. Both Men and Women wore versions. By the 1770s, The Phrygian Cap had been adopted as a symbol of Radical Political ideas, being worn by several American Colonial Patriots in the War of American Independence. Later, French Revolutionaries adapted it in the 1790s. The Cap is still used on many Countries National Flags and Crests as a symbol of Freedom. 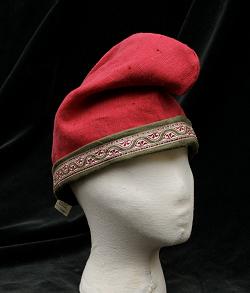