Another Neo-Persian Military Formation known, was The Grivpanvar Cavalry. These were in essence Heavy Cataphract-Type Horse Units, predominate in the 3rd Century AD. Their name comes from a type of neck armor plating known as a ''Grivpan''. The Grivpanvar Cavalry was mainly a Frontier Unit, stationed at far-flung (colonial) Persian controlled regions. They were derive from local sources and paid well for their loyalty. They were also among the first Persian Units not to have a born Persian as it's Commander (to include Lower Level and NCO Class Officers).

The Unit was noted for it's close quarters tactics and favored the use of Mace and Sword. Often attacking in ranks of two, the first was equipped with heavy spear and used to break up Enemy positions. The second rank would ''batter and stab'' at any unlucky survivors. They were noted for showing ''no quarter''. Often confused with Byzantine Cataphracts, The Grivpanvar were some of the last surviving military components that stood against an invading 3rd Century AD Rome. Over 60,000 such Grivpanvar were supposedly marshaled (according to Rome), to resist at The Battle of Ctesiphom (363 AD). Fighting valiantly, they could not withstand Rome's onslaught. 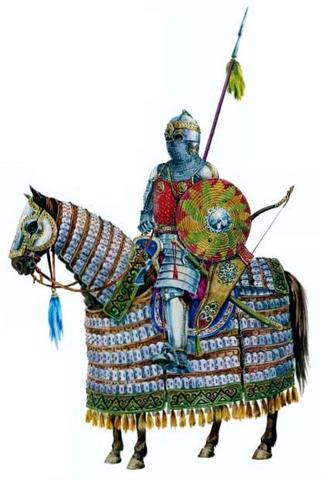