A food staple of several Great Plains Native American Tribes, Pemmican is a mixture of dried Meat products, mixed with various Fruits. Pemmican was seen as a high energy food source which, if properly prepared – could last for up to 10 years. Deer, Bison, Elk or Moose meat was preferred. It was smoke dried or Sun (Air) dried to make it dry and brittle. This was them pounded int a powder. Cranberries or Blueberries were likewise dried and pounded and added to the Meat Powder. The next ingredient involved mixing the powders into a melted Fat compound. This would congeal into a solid mass, which was allowed to cool and dry. It could be further pan fired for crunchier results.

Pemmican was first introduced to European (French) Fur Trappers and Traders in the 18th Century. They relished the Receipt and made their own for the often long Expeditions taken. European versions can include various wheat products, wine, potatoes and onions. Buffalo Pemmican would become an unofficial staple with US Cavalry Soldier in the 19th Century, as a way of making their Rations last longer in The Field. Some Soldiers would either make their own or procure it from Suttler's or nearby “friendly” Tribes.

Examples of Pemmican as an “energy Food” for Military Forces, would carry into The Boer War in South Africa, as well. Versions were even adopted (briefly) during World War I. 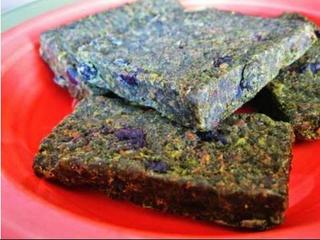