The Papal Sword was devised by The Catholic Church as both a reward and symbol of Papal fidelity. The Sword represents traditional authority and was a common symbol of such, bestowed by Royalty to Nobleperson. Seen in practice staring into the 15th Century, Papal Swords were not tipped or sharpened. This was important as they were not seen as weapons. Styles varied with each individual person it was awarded to. Normally, in the Middle Ages and Renaissance, a formal bestowment ceremony was held, normally in Rome. Blessed by Holy Father (Pope), the Sword was presented directly. In some rate early cases, it would be conveyed by The Pope's designated Cardinal. Rarely exceeding 2.5 feet in length, Papal Swords did feature scabbards. Most were extremely elaborate with Silver, Gold and precious jewels. Another common feature of Papal blades were there extensive engraved religious symbolism (especially on Handles, Blades and Scabbards).
By the 19th Century, the practice had died out, but various Swords for Catholic specific Chivalric Orders are still authorized by The Pope. 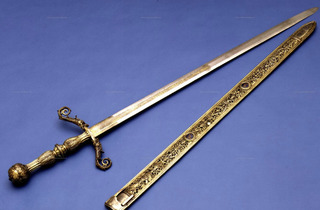