While most of The Ottoman Turk Army were highly disciplined and cut a huge swash through much of Central Europe, their Army featured an rather unusual Mounted component known as The “Deli”. Roughly translated, The “Deli” were The “Madmen”. While their general demeanor was one of “zealous attacks”, in reality, The Deli were Front Light Shock Troops used to assault an Enemy and maintain a constant pressure. They assaulted not only the Frontline positions, but Flanks simultaneously (if possible). Seen around the 15th Century AD, The Deli were also used as Bodyguards for Highly placed Ottoman Administrators.

Noted for their Light Armor (mostly Mail), The Deli used Sword and Spear as their primary weapons of choice. They also had a second Warhorse in close reserve, in case their first Horse was killed or injured. While much of The Deli is unknown, with the advent of The Sultanate modernizing his Army in 1829, the need for The Deli (as with most other “classical” Ottoman Units), were disbanded. 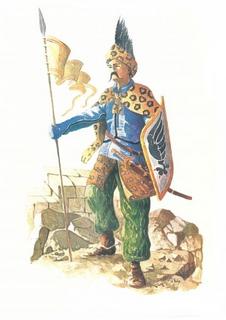