Operation ''Crosstie'' was a series of (48) below ground Nuclear tests which, which tested various warhead yields, was also used to produce the probability of using nuclear detonations as a form of ''fracking'' (or the cracking of underground strata to reach natural oils and gases). It was not explained however just ''how'' the yielded natural product would be de-radiated.

''Gasbuggy'' was the Code name for the natural gas experiment, conducted at The National Test Range in Nevada in 1967. While successful, the yield was not marketed (due to the presence of radium). ''Buggy'' was another test in 1968, in which it was determined that nuclear detonation could be used as a construction method. In this test, a channel was created by the underground (directed) explosion which produced a nearly 300-foot, 80-foot deep channel. It was though that natural water could be harnessed and used to transport to needed areas (deserts).

Other tests along the construction lines, were aimed at creating deep ground caverns which would be turned into future nuclear silos, though to be deep enough to resist possible nuclear attack from Soviet missiles. These test were conducted in Alaska (due to the remoteness). After 1968, ''Crosstie'' was discontinued, more for the increased Public outcry to stop nuclear testing within the Continental United States. 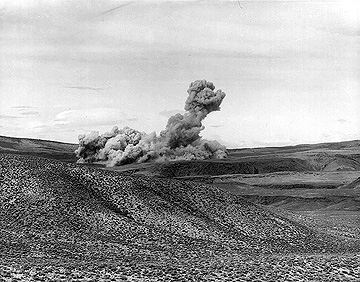