Also known as “Castle Rock”, Nottingham Castle is located in Nottingham, England. Built in 1067 under orders of William The Conqueror. Possibly of the Motte and Bailey design, Nottingham Castle was erected on a solid granite plateau, overlooking The Trent River. By the time of King Henry II, Nottingham was completely renovated in stone. A Lower Bailey was completely enclosed by a 35 foot Defensive Perimeter Wall. No other structures were placed in this portion (and it is thought that farming land was placed here).

The Upper Ward featured another series of Perimeter walling that encircled a large (50 foot tall Square Tower). Smaller Round Towers were strategically placed around this walling as well. The Upper Motte (above the Ward), featured the Keep as well as another Tower. Interior support building were constructed in this location. A Large Gatehouse was constructed to protect access to Nottingham Castle from a stone and earth bridge. This was located on the Lower Bailey and was the only access to the Castle. Serving as one of King Richard I “Royal Residences”, he left it in charge of his brother John (who assumed Richard's “Crown” - while he was away fighting in The Third Crusades.

John conducted no renovations at this time to the castle. A smaller “Castle Guard” estate was used by The High Sheriff (and Dispenser). It is from this structure, the castle and King John's poor administration – that the legend of Robin Hood, was born. In 1194, a returned King Richard besieged Nottingham (his brother John – refusing to relinquish the Crown – was in open rebellion). Using his “siege experiences” from The Crusades, Richard took Nottingham in a few days. Nottingham played “host” to more intrigue in it's history. King Edward III staged a Coup against his mother – Queen Isabella of France from Nottingham Castle. The Coup worked to a degree (with Edwards conspirators being caught and executed) and Edward assuming the Throne (with his mother quietly put into “retirement”).

King David III (Scotland) was imprisoned at Nottingham in 1365. The castle was refurbished and renovated at this time as well. Nottingham served as “Royal Residence” for a host of English Kings and Queens. By 1600 however, it was mostly abandoned (due to artillery use and the need to provide more adequate protection for Royalty). Held by The Parliamentarians during The English Civil Wars, Nottingham repulsed numerous Royalist attacks. After the execution of Charles I, Nottingham was razed and destroyed (save it's massive Gatehouse). A Ducal Mansion was erected on the ruins of Nottingham Castle, after The Restoration. It was inhabited briefly before being abandoned. In 1878, The Prince of Wales (later King Edward VII), had renovation and restoration work done to the Ducal Mansion, Gatehouse and grounds. It was turned into a Museum. It still remains so. 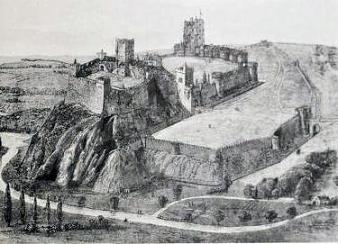