Designed and flown in 1775 by South Carolina Colonists in rebellion against Great Britain, The Moultrie Flag was so named by Colonel William Moultrie. Upon the news of open hostilities with England, he wanted South Carolina Militias to have a rallying symbol. The flag was first flown in Defense of Sullivan Island (SC) in 1776. The flag consists of a dark blue field. In the upper quadrant, a white Crescent Moon with the word “Liberty”, was place. The flag is also on of the oldest of State Flags. South Carolina had used a variation of The Moultrie Flag since it's inception. Part of the flags “legend” is that the Crescent Moon is not meant to symbolize the moon – but is in reality a Medieval Gorget (protective metal collar). 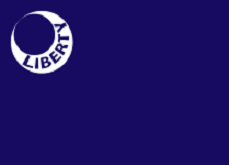