Ladders made of wood, have always been one of the first and simplest means of scaling a Fort or Castle wall by enemy troops. Naturally, the men who carried these ladders into battle were easy targets (being unable to carry defensive weapons). Around the 5th Century A.D., in China - The Mobile Ladder was invented. Sometimes called “The Ladder With Wheels”, it was an innovative design. A large heavy War Cart was constructed (with a roof on it's top – over the bed). To the front was fixed a Scaling Ladder (cut down to have it's size. The 2nd half of the ladder was placed flat on the roof of the bed. A slotted groove notch lined up the two portions of ladder. Attached by ropes, when pulled – the rear ladder piece was drawn forward where if would connect to the front attached portion. A slight human adjustment and a complete ladder was created. This could be done under fire, with the driver and Ladderman fully protected. 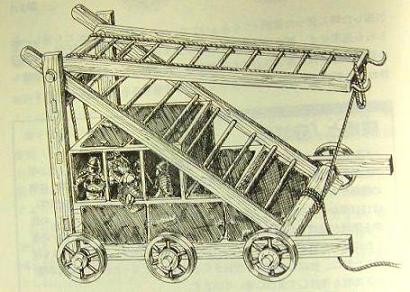