The Mitre Hat was designed after various Clerical Hats used by Religious Orders, and was a popular form of Military Headgear used by various Elite Infantry Units. It was popular in Europe from the late 17th to 18th Century. The design of The Mitre was conical in shape, tapering slightly (in some designs) – to either the Front or Back of The Wearer’s Head. The Cone normally extended 12 to 16-inches. The Front of The Mitre was further designed to curve, much like a Helmet. In some "rare" cases, The Mitre Hat was even made of stamped and shaped Metal (Copper or Brass).

The Mitre Hat had no Brim, and was form fitted by an interior “Skull Cap” or Coif. Most examples used a type of Chin Strap (but many examples did not). Decoration of The Mitre often featured Animal Skin or Fur at the bottom of The Hat. Traditionally, The reigning Monarch of an Army had his or her Monogram embroidered onto the Front of The Mitre. This was seen as identifying the “elite” nature of the Soldiers wearing them.

Color and embellishments were a matter of “taste” and often were reflective of the Elite status of the Wearer. Red, Yellow and White were all preferred colors. Heavy embroidering, often with Silver or Gold thread was also very popular. Such Headgear was expensive to produce, and many Units often punished Soldiers who lost or otherwise did not properly care for their Mitres (even if lost in battle!)

The wear of The Mitre Hat was seen as an early form of “psychological” warfare, in that they were worn by tall Soldiers,. The additional height created an even more “imposing” look. Although France adopted The Mitre. England and Germany were primary users of The Mitre. The Hat was seen as an early “Calling Card” of both The British Grenadiers and German Hessian Troops. By the end of the end of the 18th Century, The Mire was used mostly in Ceremonial Dress, with it falling into disuse by the 19th Century. 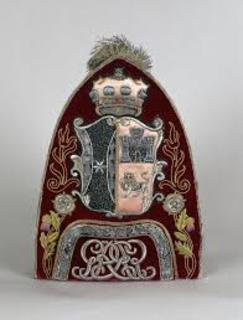