Incorporated by Philip II of Macedonia around the mid-3rd Century BC, The Pezhetarios were the backbone of The Macedonian Army. In essence, they were Phalanxmen. These infantrymen carried The Sarissa, a long wooden spear that could be anywhere from 15 to 35 feet long. Arranged in flanks (and through great training and discipline), each rank would deploy their weapon to all sides of their formation (or direction an enemy was attacking). This technique was a early form of the MUCH later "Infantry Square" (which was used with much success in the 18th/19th Centuries).
The Pezhetarios were used with great success by Philip's son - Alexander (The Great). Considered a great honor to be assigned to the Unit, they became known as "The Foot Companions of Alexander". One of their greatest battles was at Gaugamela (313 BC). Other than a massed charge of enemy infantry, The Pezhetarios served little purpose (with the advent of more effectively used Archers and War Chariots). They would be incorporated into more "traditional" Macedonian Infantry Units. 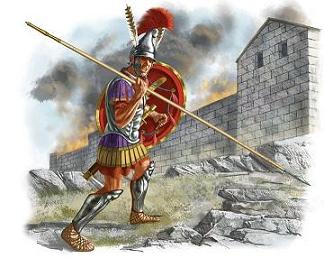