A prolific American Western Gambler, Gunfighter, Cowboy and even US Army Scout – Mr. Luke Short was born in 1854 in Polk County, Arkansas. Of ''modest'' means, Luke witnessed His Father murdered by Comanche (Native Americans) Warriors. Described as a ''kind Child'' this changed as a result of what he saw. Bullied once in School, Luke pulled a knife and slices open the Offender's face!

In 1869, Luke took His first job as a Cowboy. He would remain as such until 1875. Luke traveled to many ''Rail Head'' Cities – including the infamous Dodge City, Kansas. He like to gamble, He liked to fight. Coming to the attention of famed Dodge City Marshal ''Bat'' Masterson – He mentioned Short several times, crediting him with killing ''rowdy'' Native Americans at various times. Apparently Luke ''was a fair shot with a Gun and just as capable with a Knife''.

From 1875 to 1879, Short may have been on the muster rolls with The US Army as a Civilian Scout, probably under General George Crook's Command. Legend has Short being ambushed by (15) Sioux. He was able to kill 6 of The Braves (and escape). His ''story'' (fact or fiction), so so popular – that The Fort Worth Gazette paid him $40.00 (USD) for his ''thrilling Tale''.

Leaving The Army, Short would wind up in Colorado and took to gambling as a ''Profession''. During a particularly ''rowdy'' game of ''3 Card Monte'', a Loser accused Short of cheating. In ''self-defense'', Luke shot the Accuser. He did 6 days in jail for ''disorderly conduct'' – but ''walked'' on a Murder Charge. Short moved again...to Tombstone, Arizona.

In Tombstone, Short would run into old friends Wyatt Earp and Bat Masterson (who had left his Marshal position in Dodge City). The very ''roughness'' of The Town ''begged' of gambling and Houses of Prostitution. Short got employment as a Faro Dealer at the notorious ''Crystal Palace'' Saloon. In this, Short built more on His Western ''Mythos''.

Charlie Storms was an itinerant Gambler and troublemaker. It is unclear of if Short had met Storms (and had ''words'' with Him prior). Wyatt Earp was The Faro Dealer that night in 1881. Short, His ''Security''. Perhaps Storms saw Earp cheat him in the game, perhaps not. Short saw Storms stam and reach for Hus weapon (Gun). In seconds, Short ''closed the distance'' and put His own weapon against Storms chest. In a second, Storms had a hole. As He fell (dead), Short made sure – with another shot to the head. Luke Short was cleared of any wrong doing.

Making His way back to Dodge City, Short became embroiled in several incidents. A part-Owner of the famed Long Branch Saloon sold His interest to Short. Seeing Himself as ''set'', almost as fast as the ''ink dried on The Contract'', so too did a local Law in Town pass. The Edict declared Gambling and Prostitution illegal. An ''angry'' Short ''unaware of passing Law when He brought The Saloon'', was so angry that He nearly ''beat a Man to death'' with the butt of His Gun. Later, Lawmen found (3) Prostitutes ''still plying their Vocation'' upstairs at The Saloon. Short was arrested. He would be released. With 2 days He was arrested again (with several other Gamblers), playing Cards. He was given that classic American Western choice to ''get outta Dodge'' (literally). Short complied (fearing a lengthy jail term).

Luke made His way to San Antonio, Texas (1884) - acquiring a part interest in The ''White Elephant'' Saloon. Gambling, Boxing and even Horse Racing were all fodder for Short and his ''ventures''. Several gunfights (all relating to gambling), found Short in constant trouble with The Law (even though He was found not guilty). His ''name'' as a Gambling-Gunfighter was spreading.

This would lead to the famous Jim Coutright Gunfight of 1887. Courtright was Town Marshal and may have tried to solicit ''protection monies'' from Short. When Short declined to pay off, ''words were exchanged'' (although no one is quite sure who ''insulted'' who first. Courtright left The Saloon, Luke Short followed quickly after. Outside the two (less than 5 feet from each other), drew down on the other. Courtright did get off a shot. Luke ''hit'' 5 times. Courtright was dead outright. Luke ''walked'' on this charge, seeing that Courtright was ''corrupt'' and ''drew first''. However, Courtright had MANY friends, Luke Short almost was ''broken out of Jail'' and lynched. Able to escape to a ''safe house'' Luke was able to ''clear up'' The Courtright Matter. Selling his Saloon interest, Shot left Texas.

Luke made His way to Illinois in 1888 and (flushed with his percentage of sales from The Saloon), was married to a local Banker's daughter. Luke finance His and His Bride's lifestyle by betting on Boxing and Horse Racing. He did so ''under The Cuff''. His Wife though He was an ''Investor''.

In the 1890s, one of Short's many surviving Enemies caught up to Him on a business trip to Texas. Words were exchanged in a Fort Worth Saloon which caused Short to ''defend Himself''. Not as quick as He ''used to be'', Short killed His Opponent, but took a serious hit from His Enemies Shotgun. Short was laid up in bed for 3-months (and running low on money).

A drunk detractor in Chicago (1891) was almost killed by Short, when he was ''verbally accosted'', Short almost shot and killed the Man. He was fined, but was released. In 1893, Luke was diagnosed with Bright's Disease (a chronic Kidney issue, fatal – especially in the late 19th Century). Short and His Wife made their way to Galena, Kansas in 1893. He would be dead by September of that year.

Luke Short would be characterized many times in American Western Television Shows and Movies, often as the ''Dandy Gambler'' (of which Luke was anything but!) 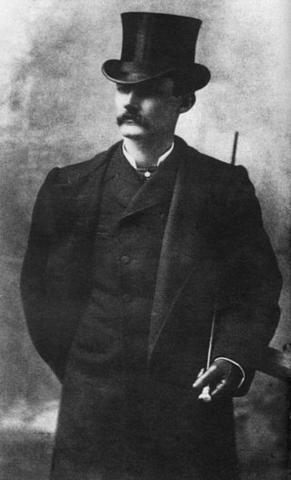