While the act of Pillaging with The “Grand Armee” of Napoleon (during The Napoleonic Wars of the 19th & 19th Centuries) was not indicative to his means, His Armies certainly reinvented the practice. By translation, to “Maraude” (Marauding) was taken to mean a way to feed and equip his massive Armies on the forage (supplies), to be found in Enemy Villages, Towns and Cities (by force). It was seen that the act of supplying a massive Army was difficult at times, due to distances traveled and achieved. Marauding was seen as the only viable solution.

Unlike the practice of “requisitioning”, by which an Enemy Army will offer to pay for such needs, Napoleon’s Army took by for quite regularly – often slaughtering  a populace or leaving them in destitution. Such was seen during the beginning of both his Spanish and Moscow Campaigns. Originally, Irregular Infantry were seen as a major component to Marauding (as this was also how these forms of Soldiers were also paid). Often, when “Professional Soldiers” did, they did so without proper supervision – which lead to great “excess” (theft of unneeded property and rape). The practice of Marauding by Armies was outlawed by the 20th Century, but major examples by all World Armies have been cited since. 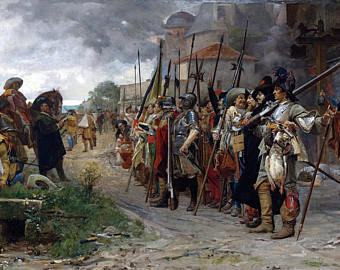