The term ''Sujaigi'' was indicative to The Korean Nation from the 15th thru 19th Centuries. It was used to identifiy a Military Commander of all Coastal Fortifications along the Korean Coast (and was relative to a General Field Officer). As such his personal Command Flag was called a ''Sujagi'' as well. Unlike a general Command Flag, it was used only when the Officer was present at a particular Fortress. The circuit of Fortifications along the Southern Coasts of Korean were part of a system called The Ganghwa Forts. In 1866, The US attempted to establish trade relations with the Country – which resulted in the complete loss of a US Merchant Ship with all hands. The ''Asiatic Squadron'' of The US Navy dispatched an Expeditionary Force which attacked The Korean Coastal Fort System by both sea and land.

The Saujagi was captured when American Forces stormed and captured the main Ganghwa Fort. Taken as a ''prize'', the Flag would eventually be kept at The US Naval Academy Museum until it was loaned back to The Korean Peoples (who petitioned it's return). Only (1) Sugaji was known to exist at the time of it's capture. The version captured is a massive 18-feet by 25-feet in length and width. Made of hemp cloth, the entirety of the Flag's Field was a pale Yellow color. It was unbordered, and featured – centered, a series of (2) ideograms (or Hanja). The translation was ''Commanding Officer Flag''. 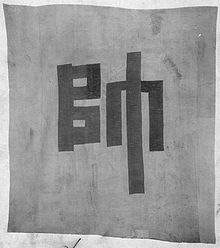