Designed originally as a Norman defensive structure, Kidwelly was renovated for use by The English against The Welsh around 1200. It was successfully besieged several times by The Welsh (and held). Having lost control in 1401, an Allied force of Welsh-French, assaulted the castle again in 1403. It was taken (along with the town of Kidwelly). The victory was short lived for the garrison. Within 3 weeks of capture a large force attacked and slaughtered the garrison - retaking Kidwelly.

Badly damaged, it was repaired and renovated by King Henry V. Kidwelly saw no action or damage as a result of The English Civil War. A moderately sized castle, it's size hides it's superb defenses. The Inner Bailey is squared and defended by 4 large defensive Towers. A semi-circled perimeter defensive wall was erected to the front of the castle. An oversized Gatehouse adds to the structures defense. Several surviving interior structures have survived the centuries. Kidwelly has been repaired and renovated many times over the last several centuries. It is open to the Public. 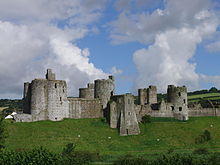