Born in Texas, Hardin is credited with between 27 and 42 deaths by gunfighting. A well known Gunfighter, Gambler, and Outlaw – Hardin was also well known for his bad temper. Legend states he shot a man once for “snoring too loud”. Turning to theft at an early age, he was pursued by both Federal Soldiers (during Reconstruction in Texas after The Civil War) and Lawmen. He even purportedly almost got into a gunfight with the legendary Wild Bill Hickok. Hardin also was a poor loser in cards (which helped project his image as a hothead). Hardin was also good at escaping from Jails and once said “no Jail can hold me!” He had killed several Lawmen in Texas and was considered one of the most Wanted men in the American West. He famously eluded a Posse of Texas State Police in 1871 (the group was 20 strong and Hardin killed 5 before The Police broke off their pursuit).

Eventually captured in 1875, he was sentenced to lighter charges (only 25 years). He only served 17 years of his term (he was bed ridden with illness for most of his incarceration). In 1894, he once again shot a man “on a bet”. Around 1895 in El Paso, Texas, – local Lawmen recognized Hardin from past crimes. Knowing of his reputation, they ambushed Hardin and shot him to death. Hardin was known to carry two types of handguns. First, the Colt 41. Caliber Single Action Revolver (aka The Thunderer) and a Colt Model 1885 .45 Caliber Double Action Revolver. 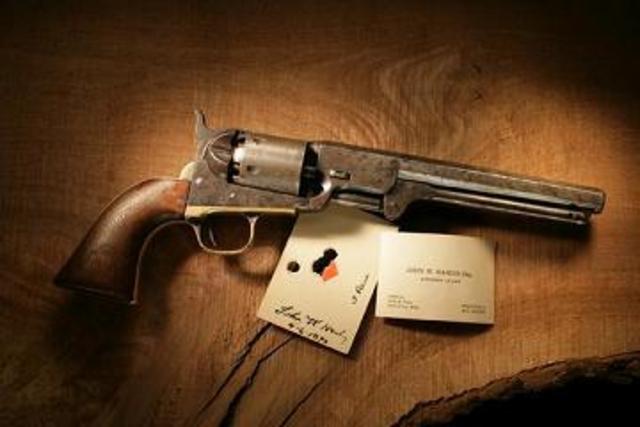