Known simply as "Joaquin", he was a scourge of early California in the 1850s. Born in Mexico, much of his life is a mixture of legend and fact (with emphasis on legend). Some versions showed Joaquin as a poor Farmers Son, while others link him to a moderate, Middle-Class upbringing  (and well educated). It is known that he, his wife and brother - immigrated to the recently admitted State of California in 1849. This was no doubt to capitalize on The Gold Rush (as countless others were doing).  It has also been speculated that prior to this journey, Joaquin may have worked as a somewhat crooked Saloon Card Dealer (managing to escape Town before being killed). He may also have started a business in selling "known" stolen horses in Texas (a crime which warranted a death sentence if caught).

Perhaps having saved monies from these two ventures, Joaquin was able to buy a Gold Claim cheap. Surveys indicated that it could be a highly profitable mine once worked. Word of this got out to local wealthy "Gringo" (American) Mine owners (jealous over his good fortune). They determined to steal the Claim. Legend now begins to take shape with the end of this take and the creation of Joaquin The Bandit. His Ranch was attacked, his wife raped and killed and Joaquin himself was horse whipped nearly to death. His Claim was stolen. Local Law Enforcement did nothing (perhaps due to his Mexican Nationality).

Surviving his beating, Joaquin recruited 5 of the worst Mexican Banditos he could find. Oddly, all 5 had the same first name as he - Joaquin! The so-called " Mountain Robber" and his Band were so effective at robbing from wealthy American Gold Miners, he wad even to slow export shipments if gold and ore dust out of the State. His "kindness" to poor Mexican Farmers persecuted by California Americans, was manifested by his giving gold and monies to these people. He earned another nickname, "The Robin Hood of El Dorado".

The State Government of California had had enough. Joaquin was credited with 45 deaths and he had to be stopped. State Legislation enacted "The 5 Joaquin Act". A $1,000.00 (USD) Bounty was placed on Joaquin's head. Subsequent Bounties were also placed on the other Gang Members. In addition, a new Law Enforcement Agency was created to deal with him. The California Rangers (styled on The Texas Rangers), was raised. Paid the unheard of sum of $150.00 (USD), per month -  some 20 experienced men were selected and started immediately to hunt Joaquin down.

Eventually trapped in The Coast Range Mountains of Coalinga, California - a fierce firefight was fought. When it was over, Joaquin was dead - with 3 of his Gang killed as well and two captured  (later hanged). To ensure the $1,000 Bounty - Joaquin's head was cut off and placed in a large glass jar of alcohol (as was the malformed hand of his Lieutenant, ''Three-Fingers Jack''. Displayed at The Mariposa County Courthouse in Stockton, California, it was eventually sold to a Private source. For many years "Joaquin's Head" was shown all around The State for $1.00 (USD). The head survived until it was destroyed in The Great San Francisco Earthquake of 1906. Joaquin's legend also served as the basis for the fictional character known as "Zorro" (although his "background" was greatly changed to reflect a more heroic appeal). 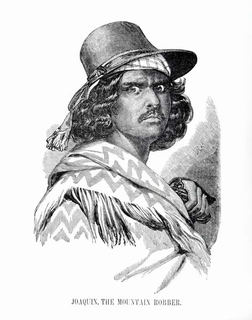