Both described as a type of Ancient Japanese War Archer and a stylized form of Archery Training, The Yabusame style of Archery is traced back to 10th Century AD Japan. The Bow was considered a symbol of power and authority in Japanese Culture. As such often great pains were taken in crafting such weapons – as were form of training in it's use.

The legend of The Yabusame came from The Battle of Yashima (1185 AD). Part of The Genpei War between opposing Ruling Houses Heike and Genji, several of The Heike Ships became fouled in the sand. They had to wait for the tide to free themselves. As a challenge to The Genji, they hung a huge Fan from a Ship Mast. They began to taunt The Gengi to shoot down the Fan. A Genji Horseman, galloping into the Sea – while maintaining a fast gallop – fired his Bow and shot down The Fan. Later, The Heike were defeated by Archers using a similar ''running tactic''.

To commemorate the Event, future generations of Samurai Archers began to re-create the shot as a means of demonstrating their skill as both Horsemen and Archers. A small target was hung from a platform, which required a Yabusame Archer to hit the target using a highly stylized shoot stance. Later, in the 17th Century, such ceremonial rituals were seen as a way of honoring the ''Gods of The Harvest''. The practice was so serious, that often Archers who could not completed the course of instruction were ordered to commit ritual suicide. Training took many years.

Although discontinued in the 19th Century, The Yabusame Archer and stylized training was brought back into fashion as a treasured piece of Medieval Japanese culture and custom. The ritual is still performed once a year at harvest season and to the delight of foreign visiting Dignitaries under special invitation of The Japanese Prime Minister or Emperor. 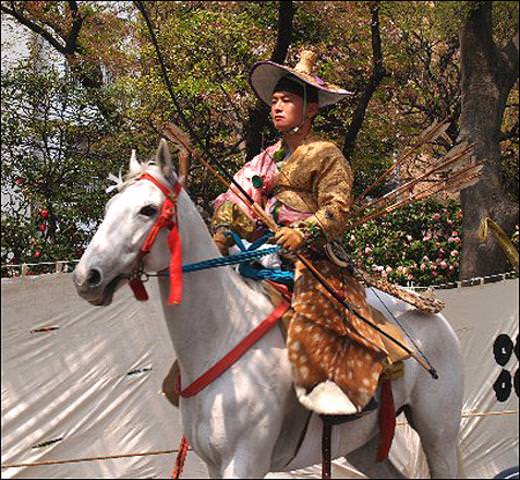