Much has been written about these Feudal Japanese Warriors. Originating “officially” in the 10th Century, The Samurai Class were akin to the European Knight. Mostly born of Nobility, a young Nobleman normally had few options available to him (to rule if Royal, to serve as a Warrior to a Lord or become a Monk/Priest). Some “lower Class” Nobles (poorer) were also Samurai. As time progressed, a rigid Code of Ethics was implemented known as “Bushido”. Bushido was a way of life for ALL Samurai. It dictated dress, deportment, manners – practically all facets of a Warriors life (and in some cases, his Family). Fiercely loyal to their “Master” (Shogun, Warlord or Emperor), The Code of Bushido was very similar to the European Codes of Chivalry that those Knights were honor bound to follow. Often, - for a Samurai- violation of the smallest rules could lead to ritual suicide or Seppuku.

Taught by only the best schools in martial arts warfare, their lifestyle was akin to the ancient Greek Spartan lifestyle. Taught to feel no pain (or show it), the basic Samurai Warrior evolved into a literal “killing machine” that broached no violation of his (or his Master's honor). Identified by their often elaborate armor and of course their “sacred” Katana Swords, The Samurai reached their apex of power and control in the 15th Century. Samurai classification was considered a prerequesite for most of the important Administrative positions through Feudal Japan. Although some dangers were inherit by Shoguns and Warlords regarding their knightly Samurai. Allowed to raise and recruit Armies, some more “daring” Samurai would abandoned their Code (or modify it to their needs), and overthrow their Masters. This was the case during the many Feudal Civil Wars (as in The Onin Wars of the 15th Century).Some Samurai were also tasked with Law Enforcement and Judicial Duties within the Region they lived. These “Warrior Policemen” were very effective at maintain law and order.

However, by the late 19th Century – due to the constant and improved contacts with Western European Countries, Japan chose to become a more “modernized” Nation (and as such began to develop a modernized Army). The “Way of The Warrior” as quickly (and painfully put to an end). Emperor Meji proclaimed “Samurai” as an outlawed class, forbidden to wear their swords or other emblems. This would lead to the last “Clan War” with Imperial Japanese Army fighting the last true Samurai “Rebels” at The Battle of Shiroyama (1877). The Clans fought to the last (as in true Samurai fashion) – but were unable to withstand “modern” cannon and musket. Although gone, the Code of Bushido and the ancient Samurai way was once again revisited by Japan in the 1930s – when Imperial Japanese Armed Forces used it as a propaganda tool for recruitment and the eventual advancement into World War II. 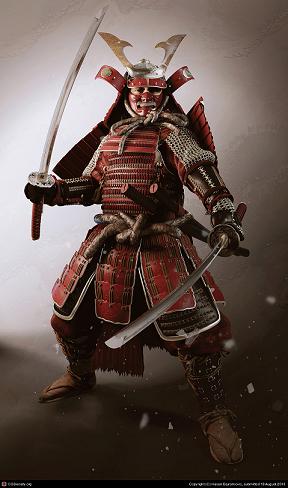