A "workhorse" Fighter of The Imperial Japan Air Forces during World War II, The Nakajima was the counter to The Mitsubishi Company's "Zero" Fighter. Known as The "Falcon", it was nicknamed "Oscar" by The Allies. Often misidentified, the main glaring difference was that The "Oscar" had a more slender fusilage and tapered wings. First flown in 1939, The "Oscar" (of which 5,000 were produced), seated 1 Pilot. It was 30-feet long with a wingspan of 35-feet. It had a serviceable airspeed of 500-mph (at dive speeds), with a cruising speed of 330-mph. ''Oscar'' had a relatively low operational ceiling of only 11,000 feet.

The Fighter featured (2) fixed 12.7mm Machine Guns that were mounted in it's Engine Cowl. It could carry (2) 550-pound Bombs. Used mostly in close ground support, The "Oscar" was seen in combat in many of Japan's Island Defense Operations.Effective for it's ability to get "close to the ground", many of them were captured at the end of The War by China (and pressed into their fledgling Air Force). Several were even seen in the skies over North Korea in the early years of The Korean Conflict. 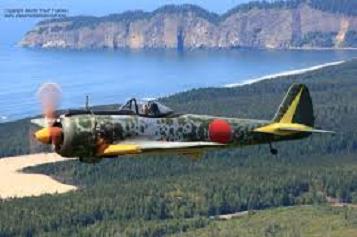