The Imperial Japanese Vessel “Shinshu Maru” was a Landing Craft/Aircraft Carrier which was built in 1933. Launched the following year, The “Shinshu Maru” was the World’s first attempt to merge a Troop Landing Transport with an Aircraft Carrier. Only (1) was built and deployed by Japan. The unique Vessel displaced 71,000-tons and was 475-feet long. Her Beam was 75-feet tall. The “Shinshu Maru” could hold 2,000 Crew and Soldiers for delivery. In addition, The “Maru” could carry up to (26) Sea Reconnaissance Aircraft. These Planes could be launched by Catapult (as the Vessel had no Flight Deck in a traditional Carrier design). The “Shinshu Maru” supported an armament of (4) Type 88 Anti-Aircraft Guns and an additional (20) 20mm AA Guns. She fought in several World War II Pacific Battles before being torpedoed at The Battle of Sundra Strait (East Indies) in 1945. 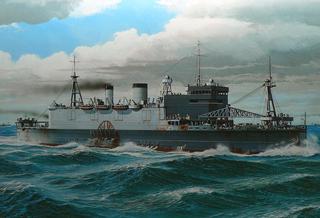