Towards the end of World War II, a desperate Imperial Japanese Army and Navy began to commission ''Suicide Units'' to operate against allied Forces in The Pacific Theater of Operations. These Suicide weapons were known to The Japanese as ''Kaiten'' or translated ''Turn of Heaven''.

Although undetermined, possibly (60) such weapons were produced. The ''Kaiten'' was in essence a Manned Torpedo. Stripped down to a very basic propulsion system (with guidance provide by it's Human Pilot), The ''Kaiten'' would be launched (lowered) from either a Warship of Harbor (Port) deployed. The Mission was for The Pilot to ram an Enemy Warship's Hull. The Pilot was expendable.

The ''Kaiten'' were 3-tons displaced. They measured 40-feet with a diameter of 3-feet. Propulsion was provided via 112-batteries, which produced 54-Volts. This was enough to operate and maintain it's 6-Watt Engine. Hand steered, The ''Kaiten'' carried 660-pounds of High Explosive (fused to manually detonate). The weapons could achieve 13-mph. The Mission depth was rated at 66-feet.

To maximize it's use, various Models of ''Kaiten'' were also deployed with a 20 to 50mm ''Deck Gun''. No records indicate that any ''Kaiten'' deployed their guns – however.

Ten Missions involving The ''Kaiten'' were initiated between 1944 and 1945 (the end of The War). At least (4) US Warships of various Classes were crippled or otherwise destroyed by known ''Kaiten'' attacks. The doomed US Heavy Cruiser USS ''Indianapolis'' (which carried key components for America's first Atomic Bomb deployment, was to be targeted by ''Kaiten'' Suicide Torpedoes – but the attacked was scrubbed (The Japanese Navy did not know about the components and though the attack a ''waste'').

Several ''Kaiten'' (unused) have survived The War and are on display throughout The World. 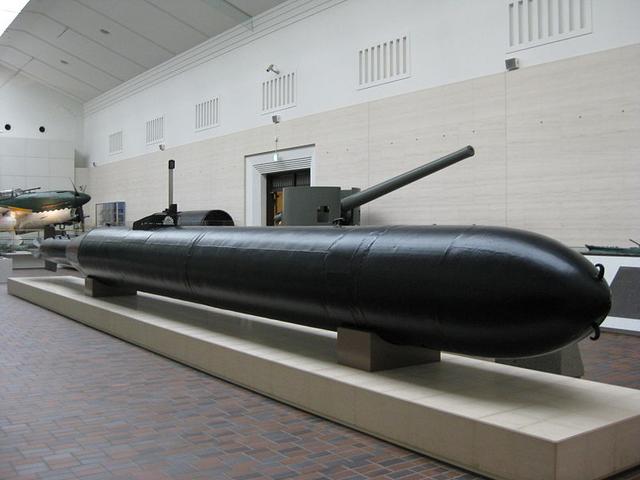