The practice of ''Junshi'' was relative to the previously discussed ''Seppuku'' (Ritual Suicide), The term was translated into ''To Follow Into Death'' – and was related to a Samurai or Lord's own death by being followed by His Servants – and others relating to the Honor of the person who died. Unlike other ''Honor Killings'', Junshi was reserved for Lords who were murdered or slain on the battlefield. When word was received that a Master had been slain in War, all His Servants were expected to undergo Seppuku. This was to include Man Servants, Valets, Cooks and a whole Host of Workers. The Families of those Servants were not expected to commit Jumshi (although many did). This was due to the fact that without their Master, ''they'' had no income and eventually would starve.

This was not entirely true in some instances. The Act of Junshi actually bestowed honor onto The Servant Family – who often could find ''employment'' with another Lord. The Act was seen at it's zenith from the 13th thru 18th Centuries in Japan. 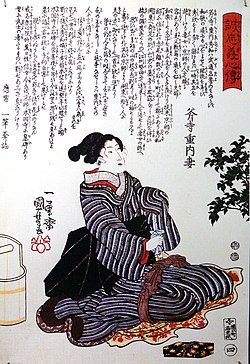