The Code of Bushido was a strict Code of The Samurai Ruling and Warrior Class. It was similar in many ways to the European Code of Chivalry. The Samurai was a type of Medieval Knight. Their Code of Life (often referred to as “The Way”) - is somewhat difficult to trace to it's beginnings. An early version of Bushido dates back to 7th Century (AD) Japan. This version defined Honor, Duty, Self-Sacrifice and Obedience with regards as to how a Nobleman was supposed to behave to others (even the Lower Classes - to a degree). By the 13th Century, a more refined version of Bushido began to develop. By this time, an actual written “Code” was put forth. This Code was not only regulated to Nobility, but the Warrior Class of Knights (Samurai).

Often interwoven with a Warrior's Oath to his Master (Lord, Shogun, etc), the mere thought of violating even one section of The Code, meant death. In the 16th Century, Bushido was incorporated into a formal Law. The Code was NOT binding on women or the Lower Classes (although they emulated it). The Code was typified by “Virtues”. Each was incorporated into the daily life of a Warrior. They were: Righteousness, Courage, Benevolence, Respect, Sincerity, Honor, Loyalty and Self-Control. Later, The Code included: Piety, Wisdom and Fraternal Respect. Bushido remained a focal point of Japanese Culture until the 19th Century, when Japan turned to a more “Western” approach in it's Military Philosophy. At one point, Bushido was outlawed (with those following it openly being killed/executed).

Later, (in the early 20th Century), a more Militant Japan readopted The Code for it's Military Forces. Used as a common bond to unite the Army and Naval Forces, it was twisted into a fanatical view of winning through self-sacrifice (suicide). This was accomplished through the purposeful death of soldiers (by either crashing heir aircraft into enemy ships or positions or the like use of ships and submarines). Somewhat outlawed again after World War II, Bushido saw another resurgence in the 1970's when a renewed revival in Japanese Swordsmanship developed (not only in Japan but Worldwide). The Code was used to emphasize the mental preparation (and Kata or form of movement) – used in competition. 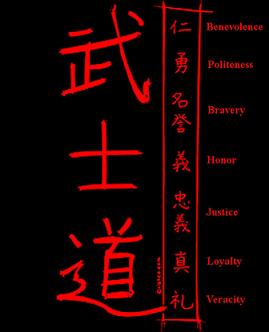