Although the origin of the name “Jacob’s Ladder” is somewhat obscure in Nautical Terms, it is linked to The Biblical Old Testament story of a ''mythical'' Ladder associated with The Prophet Jacob. The name was applied to such scaling Ladders on Ships as far back as the 16th Century. These were wooden framed climbing ladders used to climb between (and up among) Main Masts. Unlike Rope Ladders, they provided more stability when climbing during high winds.

Spreaders were the wooden framed that stopped the rope steps or rungs from tangling and as such would remain taunt. Hooks applied to the ends, allowed for the Jacob Ladder to attach to both rope connections and wooden Spars between the Canvas. Often, Jacobs Ladders were left in strategic climbing points throughout The upper Canvas. However during Battle, they were removed to prevent them becoming secondary shrapnel if hit by an Enemy Gun.

By the 19th Century into 20th Century, Jacob Ladders were used on the Lower Decks to better load Lifeboats on not only Sailing Vessels but Ocean Liners. Even with today’s advances on Nautical Technology, Jacob Ladders can still be found in use (although metal framing is the accepted construction material used). 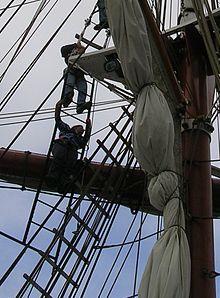