All Northern soldiers enlisting in The Army – were issued basic field equipment. Leather (being the predominate material of choice for manufacture), was used to construct the basic issue. First, a strong leather belt (with buckle, of course) – was issued. Often wider than a “modern” belt (at 2.5 to 3inches in width), it was worn on (and over) the waist. A Percussion Cap Box (with attachment straps for affixing to the belt), and a Bayonet with scabbard – completed the list. Individual knives and cases were at the soldiers choice. Next, a Cartridge Box (used for carrying around 60 pre-made cartridge pouches with lead balls) which was attached to a long over-shoulder strap, was worn (on the left or right side). In the early War, knapsacks made of a variety of materials were used. Other items (often worthless and procured from the local Sutler's (Civilian Supply) Store – were brought (and often quickly thrown away), as the War wore on.

Shoes (which were the essential component of ANY fighting man, were often a problem. Initially, Brogan Boots (often called “Booties”) were issued. Made of stiff and uncomfortable leather, many soldiers “suffered” from often too tight or too loose fitting leather shoes. Knee High or Mid-High Boots were better tolerated to Cavalrymen issue. Southern soldiers too, wore identical leather equipment (with some slight variations). Most of their equipment were captured from Federal Arsenals (or taken from dead enemy soldiers on the field, when practical). Rebel soldiers too suffered from “Shoe Issue” as well. In many cases (towards the end of The War), MANY Southern soldiers fought WITHOUT shoes altogether! A “popular pastime” involved poor Rebel soldiers risking Sniper and Picket shot from enemy positions as they “crawled around” a battlefield to find the “right fitting” show or boot from a dead Yankee soldier! A large amount of foreign import goods from England and France were available until the ever tightening Union Blockade stopped all trade and in-coming resources. 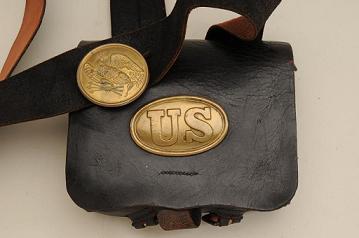 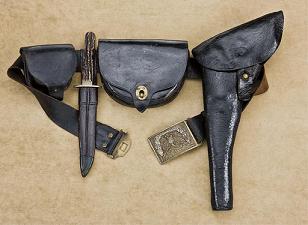