The Luftstreitktafte was The Air Corps. Branch of The Imperial German Army, during World War I. It was founded in 1910 and would continue until disbanded in 1920, as a result of The Treaty of Versailles. Initially, The Air Corps. Was tasked, not as fighters – by Reconnaissance and Spotters for Ground Artillery. With the rapid development of Air Combat tactics, Air to Air – as well as Ground Support, would become the primary Mission of The Imperial German air Corps.

While early German Fighters were primitive device, such as it's first Fighter Plane, The Fokker M5K, The Air Corps. would quickly develop (and adopt) many classes of Fighter, mostly advances in The Fokker Class. These Fighters were normally Piloted by a single Pilot, while some Models had duel seating for a Rear Gunner. Traditionally, German Fighters did not feature dual seating as did Allied Fighters in The War.

Bombers were also part of The Air Corps. The advantages of long-range Bombing Missions allowed for the first time, an Enemy the ability to target Civilian targets in Urban Cities. The use of Airships, while widespread in The Imperial German Military, were not under control of The Luftstreitktafte (but both The Army and Navy).

Imperial German Fighter Squadrons were known as Jagdstaffel or simply ''Jasta''. There were (37) Squadrons deployed through Germany, France and Belgium. Each Jasta featured a specific color scheme to their Fighters, as well as a form of imagery or icon painted on the fuselage of the Fighter. Numbers were however inconsistent, with a Jasta being as many as (15) Fighters to as little as (10). By the end of The War, five to eight German Fighters were not uncommon.

The Luftstreitktafte, while disbanded in 1920 as a result of The Treaty of Versailles, which established Germany as the loser, The Command Structure of The Corps. Would be used to establish Germany's next Air Arm – The Luftwaffe. 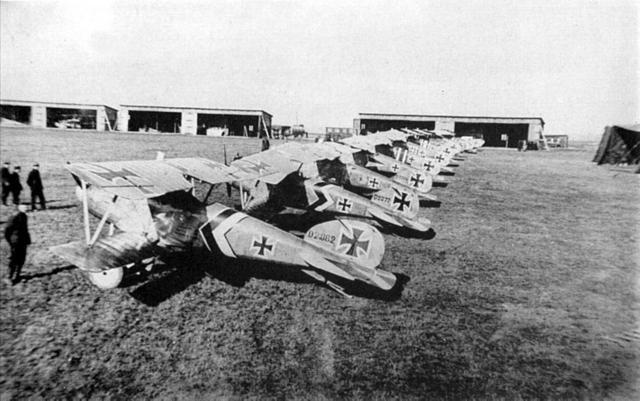