A Royalist Regiment raised in support of King Charles I during The English Civil War, The Regiment was raised by Lord Hopton in 1643. They fought in 16 major Battles. Most of their engagements centered around Castle Sieges (or Garrisoned Troops). A Company revolted and switched side later in The War and fought with Cromwell. They still retained their Lord's Uniform and Flag (although some state that they removed The Three White Mullet (Heraldry images) on the Flags Center. The Royalist Regiment was captured after being besieged at Pendennis Castle (1646). The Regiment Colors were traditional Red for The Monarchy. The Upper Left Canton was White with The Red Cross of St. George placed over it. The (3) Heraldry Mullets (in White), cascade from The Center of The Field – downward. These are part of Lord Hopton's personnel Coat of Arms. 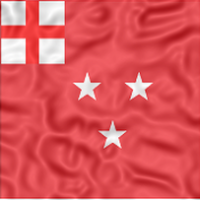