Another possible Ancient Military ceremonial practice, was the use of an Honor Guard. These were specially selected Soldiers and Warriors chosen to bear or carry an Armies Flags or Standards as well as other images of an Army (as seen in Ancient Rome with The Signifiers and Imaginers). During The early to mid-Middle Ages, when the use of Flags and Banners became more standard, such Soldiers were selected to bear The Flag before an Army. They were not however the same as a Color Bearer who bore a Battle Standard into battle.

Normally placed before a review of an Army by it’s Command or Ruler, size was considered important. All Soldiers chosen were do so for their overall height and general “excellent” physical condition. This was also seen as a form of psychological warfare towards any nearby Enemy “watching”. Each Guard Unit was composed of at least (2) Soldiers under “Arms” (with weapons). It was their task to “protect” The Nation’s or Kingdom’s Flag or images. The remaining Soldiers carried Flags, Banners or Standards. Seen as the ultimate in Honor to be selected as such, traditionally Officers of a Regiment were not selected for the ceremony, but Non-Commissioned Officers could be.

Today, Honor Guard Units are not only used by Military Armies throughout The World, but for Civilian Schools, Musical Bands and other Civic Organizations. The use of National, Regional, State or Organizational Flags are often used. Many Uniforms are either the standard Military issue of that Country or – more fanciful versions meant to approximate a Military Organization. 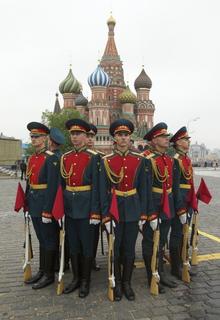