The HMS “Victory” is one of the oldest commissioned Naval ships in The World. Commissioned in 1759 and launched in 1765, she is a Ship-of-The-Line vessel. “Victory” displaces some 3,500 tons and is 227 feet in length. Her beam is 201 feet tall at her Mainmast (in height). Wind powered, she uses over 5,000 feet of sail. “Victory” crewed around 850 Officers and men. She carried over 100 various cannons and related armament of different poundage (her larger guns being 68-pounders) and featured 4 Gun Decks . “Victory” (although never ironclad), features 2 foot think oak hulling. She had 10 sister Ships constructed. Named for the numerous victories of The Seven Years War, her first major engagement was at The Battle of Ushant (1778), during The American War for Independence. France (who had sided and supplied the rebellious American Colonies) – sent their ships “Ville de Paris” and “Bretagne” to an island of The English Channel. Both French ships were “Line Class” warships, possessing over 190 guns total between them.

The first time “officially” the two Countries met as enemies since France's recognition of The American Colonies as a Nation – the battle will be considered their first “naval action”. “Victory” engaged both ships (and suffered little damage). However, the battle ended in a draw. Copper sheathed (her hull), in 1780 – she would against engage French forces at Ushant. This time, some 21 French warships were dispatched. “Victory” was saved from destruction by a hurricane force gale that developed and held the French Navy back. At the Battle of Ft. Vincent (1797), during the French Revolutionary Wars, “Victory” on escort duty engaged The Spanish Fleet. She sunk 4 vessels (and took 4 as capture). Ordered to be reconditioned as a Hospital Ship in 1799, the loss of HMS “Impregnable”, canceled this plan – and “Victory” was refitted in 1800. Her guns were also increased to 104. Repainted yellow and black (from red), her ship board Powder Magazines her also refitted in copper (for protection). “Victory” next became the Flagship of British Naval Hero Horatio Nelson (taking command in 1803). This was short lived however, with Nelson feeling that she was “not ready” for active combat! Under new Command, “Victory” captured many French Warships.

Her “testing” must have impressed Nelson, for in 1804 – he took “Victory” again. Her “glory” was cemented at The Battle of Trafalgar (1805), during The Napoleonic Wars. “Victory” broke the French Naval line (and engaged in fierce Broadside combat between multiple French vessels). Although it cost the life of Nelson (fatally wounded in the battle), - she won the day (along with the rest of the English Fleet. Not unscathed, “Victory” was severely damaged (so badly, she had to be towed to Gibraltar). Once repaired, “Victory” returned the body of Nelson to England (1806). She served The Navy until 1812 (when she was used as a Depot Ship). An order was initiated that “Victory” be broken up (destroyed). Her “legend” states that the order was lost (misplaced) – thus sparing her “life”. “Victory” sat until 1889, when she was refitted as a School of Naval Telegraphy. She remained as such until 1904. Again slated for scrapping, it was at the intervention of King Edward VI that she was again spared.

It was the 100th Anniversary of Trafalgar that caused renewed interest in the ship (although renovation monies would be slow to come, resulting in “Victory” again slowly decaying in Dock). In 1922, work was finally begun to restore her, but the slow process was suspended during World War II. It took until the 200th Anniversary of The Battle of Trafalgar, until she was fully restored. Battle damage (still present) from 90 French cannon balls were discovered. Although now a Museum, “Victory” is still considered the Flagship of The First Sea Lord (for ceremonial purposes). She is currently docked at Portsmouth Naval Yard, Hampshire, England. 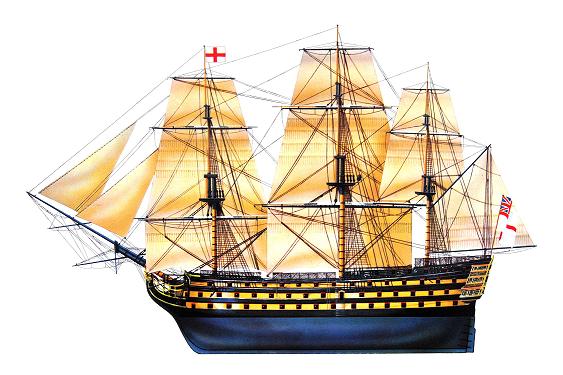