Built in Le Harve, France in 1793 – the vessel was commissioned by The French Navy as The ''Unite''. A ''Corvette''-Class Warship, She was part of The Napoleonic Fleet deployed to harass British Shipping. In 1796, ''Unite'' was captured intact by The British Warship HMS ''Inconstant''. She was commissioned into The Royal Navy as HMS ''Surprise''. She was refitted and reclassed as a Frigate. The ''Surprise'' operated in The Caribbean in 1799, attacking not only French Shipping and Warships – but The French Allies, The Spanish. The ''Surprise'' led an attack against The Spanish Stronghold of Porto Bello, taking the Port and inflicting over 400-casualties.

HMS ''Surprise'' served the remainder of The Napoleonic Wars in The Caribbean and Pacific. After The Treaty of Amiens in 1802, she was sold and broken up. However, she became the stuff of ''fictional legend'' when she served as the Warship featured in the Novels of Patrick O'Brien. In the 1990s, a replica full scale ''Surprise'' was constructed and was featured (rented) by The Paramount Film Company for use in their bringing The O'Brien Novel to The Screen as seen in ''Master & Commander – The Far Side of The World''. 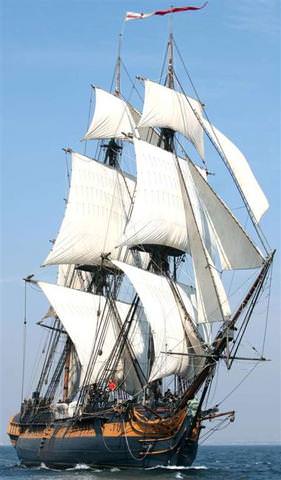