At one time, The HMS “Black Prince” was considered one of the most powerful warships in The World (next to her sister ship, HMS “Warrior”). Built in 1859 and launched in 1861, she displaced over 9,000 tons and was around 420 feet long. She stood almost 60 feet tall (beam). She was wind (sail) powered and featured 10 boilers and 1 Steam Truck Engine. She carried over 150 different guns (with her primary weapons being 10 68-pounders). “Black Prince” crewed over 700 Officers and men. Her hull and some of her Deck structures featured 4.5 think armor (iron and steel plating). She served as the Flagship for The English Channel Fleet until 1866. She was re-fitted in 1874 and did cross The Atlantic Ocean once to attend the installation of the new Governor General of Canada (1876). In 1896, she was designated a Training Ship and re-named The “Emerald”. Again renamed in 1910 as HMS “Impregnable”, she still performed duties as a Training vessel until she was scraped in 1923. 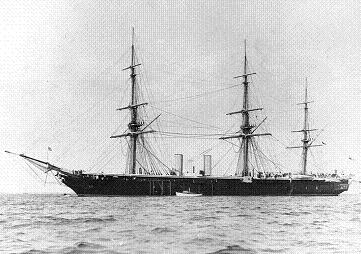