Herman Goring was the third most "powerful" Man in Adolf Hitler's Third Reich (no doubt "argued by BOTH Himmler and Goebels!). He occupied more less than 7 Military and Civilian Head Administrative Posts in Germany. Officially identified by the Military Title of "Reichsmarshall" (the highest Rank attainable in Nazi Germany), he "warranted" his own "personal Standard", to be flown whenever his "presence" was needed. Similar to Hitler's Standard, Goring's Standard reflected his "Luftwaffe Heritage". He was a Minor World War I Combat Ace, and was Commander in Chief of The Luftwaffe from 1939 to 1945. There were several variations of Goring's Standard. The first  (used from 1939 to 1945), was a 3x3 Banner, that was composed of two sides. The first side was a Light Blue Field (The official Luftwaffe Color), bordered in Gold. A Gold Adler Eagle, clutching twin Batons (the symbol of a Field Marshal), was mounted in the Center. The back (or reverse) of the Banner, was also a Light Blue Field. It featured a large modified Maltese Cross (Black), with a Silver NSDAP Swastika in the Center. Golden Adler Eagles formed a circular patterned around The Cross. The entirety wad bordered in Gold. From 1941 until 1945, Goring's Standard was essentially the same, with the exception of most of the Standards symbols greatly shrunk in size. 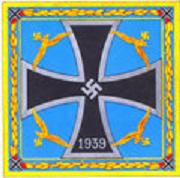 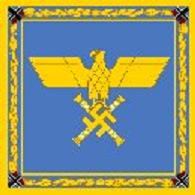