The infamous Leader of Nazi Germany's State Protection Police Force, The Schutzstaffel (or SS), - Heinrich Himmler was the third most important Official in Adolf Hitler's twisted Government. Himmler (who operated The Protection Branch starting in 1929), also operated Espionage against The Germany people, to root out perceived traitors against The Nazi Regime. Himmler was also responsible for enforcing the equally infamous "Nuremburg Laws" and the establishment of Forced Labor Facilities   (aka Concentration Camps). Himmler used a Personal Standard  (from 1936), that was both flown as a Flag  and displayed as a Standard.

The Standard was a Field divided in 4 quarters by twin inverted triangles. These were Black in color. The second triangle was White. Placed center, was a large Silver "Adler Eagle" (The Reich State symbol), over a Swastika icon. Himmler used this Standard until his capture by Allied Forces in 1945. 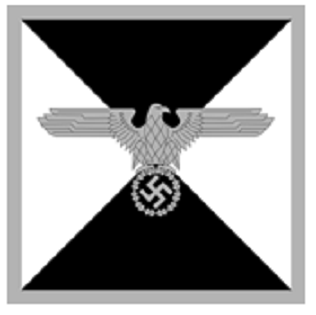