One of the most famous of Byzantine structures, The Hagia Sophia is an Engineering masterpiece. The structure has “served” Christian and Muslim worshipers for over 1,500 years. The Hagia Sophia has also survived several catastrophic earthquakes, 2 Emperors and countless battles (around it). Located in Istanbul (then Constantinople), it was designed by Anthemius of Tralles and Isidorus of Miletus, under commission of Emperor Justinian I. An earlier Cathedral had occupied the site (but was destroyed in a recent revolt). Cleared, The Sophia would be built in it's stead. Construction of the Hagia Sophia began in 532 A.D. (and finished in 537 A.D.) Every possible resource was applied to aid in it's quick construction. No expense was spared in appointments by The Emperor.

The interiors were layered in fine Marble, Gold Leaf and precious Jewels. Designed in a layered Square-shape, it features a massive Dome approximately 100 x 106 feet in diameter and 184 feet tall. Specially designed triangular supports (never before attempted), were created to hold the Dome in place (and stable). Made with small windows and slots throughout, The Hagia Sophia Dome is designed to catch ANY available light source and “magnify it”- to produce light inside the Church. This technique was “borrowed” from a similar “design technique” used on The Parthenon. The Hagia Dome is considered the 2nd largest “Dome” from The Middle Ages to have survived. The normal support columns of the interior of the Church were hewn from Green Marble.

Many of the Arches and Hallways were “created” using different “colors” of Marble to enhance lighting effects and provide a sense of awe. Severely damaged in 558 A.D. - by a massive earthquake, The Sophia was the first structure in the City to be rebuilt. It was raised again in 563 A.D. Serving as the Main Church and seat of power for The Orthodox Eastern Church until 1204, it was converted into a Western (Catholic) Cathedral. This was reconverted into a Islamic Mosque with The Ottoman Invasion and capture of the City in 1453. All Christian imagery was removed (or painted over!) The Muslim's added 4 large Minarets to The Hagia (some 150 feet in height).

Following the collapse of The Ottoman Empire in 1918, a “secular” Turkish Government allowed the older Christian mosaics to be uncovered (restored) – although no “active “ Christian Services could be preformed. By 1935, The Hagia Sophia was considered “unsafe and structurally unsound”. Over the decades, it has been somewhat restored (a Museum). 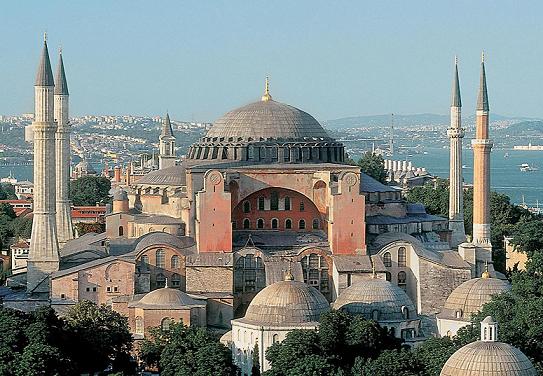