One can hardly watch an American (or Italian) Western without seeing either an Outlaw, Lawman or Cowboy – twirling or Spinning His Pistol, prior to returning it back to His Holster. In case One thinks this action is a standard bit of Western ''Americana'' – it is not. In fact, much of Gunspinning is as much myth and legend than ever having been used – by a ''real'' Gunman. As we have seen, The ''Fast Draw'' and related ''Trick Holster'' and Shooting Tactics were more Show (and meaning ''Showman'') than actual practical Combat Tactics.

Perhaps the first example would be William ''Buffalo Bill '' Cody and His ''Wild West Show''. Running from 1887 to 1906 (mostly in Europe), a feature of The Show featured ''Trick Shooters'' with Rifle and Pistols. These included the exaggerated spinning and twirling (rolling the Pistol around One's Fingers to achieve the effect). The key was to move the weapon with speed an dexterity (which was loaded, making it the more dangerous), placing it into it's Holster with ease. One was impressive, two such was wondrous.

As stated in Gunfights, the goal was to quickly aim and fire, NOT impress each other with such tricks. No record of such was ever recorded in any Western Gunfight or in the biography of any Gunfighter or Lawman. In fact, most who ''knew'' of Gunspinning directly related it to ''Carnival and Western Shows'' only. However, most Americans of a certain age, grew up watching that Television Gunfight, Gunspinning included. Many of those children, grabbing their own toy guns emulated the effect and the rest is – as they say, ''History''. 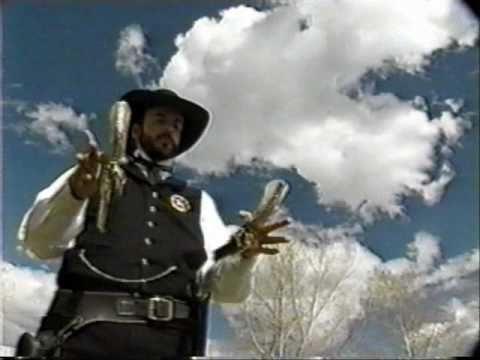