The specialized Infantry Forces known as “Grenadiers”, trace their origins back to the early use of gunpowder in combat. The term (from The French), meant “Grenade”. First coined in the 17th Century, they used primitive Hand Grenades, weighing roughly 1-pound and made of iron, they were filled with gunpowder and fitted with Slow Fuses. Once lit, a Grenadier advanced on an Enemy position, “enmasse”. Throwing the Grenade, they would cause great disruption or open a breach in Lines (which could be exploited by Cavalry).  A requisite for Grenadier was size. Typically 5’9” or better, thus was seen as both “psychological” in nature, coupled with a farther “throw”. Grenadiers were also used early in “Gunpowder Warfare” to attack fortified positions of wood and stone. Often, Soldiers assigned them the title of “Forlorn Hope” Regiments – due to their extremely high casualties rate.

By The Napoleonic Wars, Grenadiers were incorporated into many European Armies. However, the use of hand thrown explosives was well on the wane. Although size was still important, most Grenadiers were used as “Shock Troops”. The typical Grenadier Uniform was often brightly colored, to allow them to stand out on the battlefield. Also, most Grenadiers wore the “Mitre Hat”, made of Bearskin Fur. Unlike traditional Bearskin Hats, these versions were smaller and more conical in shape. The basic Unit identifier was a Cannonball, featuring “flames” extending from the top (a Grenade).

Seen mostly as a Ceremonial Units today, Great Britain still maintains an Active Grenadier Guards Unit within The Royal Army. Although today, the need to throw Grenades “enmasse” has been replaced by the use of Modern Grenade Launching Weapons. Some Armies identify any Soldiers who carries such a weapon in combat principally as a “Grenadier”. 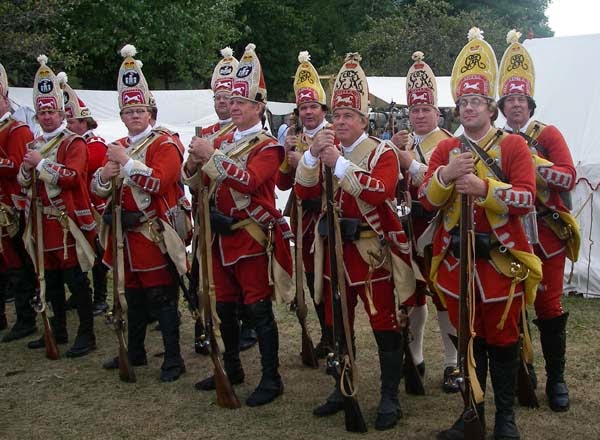