Giovanni Boccaccio was born in Florence, Italy in 1313. A well known Writer in his day, he is best known to history for his work “The Decameron”. Basic in though and easy to read, it still stands up today as a classic piece of Medieval Society and Social commentary. Born into a wealth Family (his Father was a Merchant), Boccaccio was apprenticed early to a Banker in Naples. However, Giovanni did not excel at this vocation. When not working, the young man began to write and publsh poems and stories dealing with the concept of “Courtly Love”.

He began to make a “name for himself” and was widely read. His Poems would also be a source of inspiration for future writing greats such as Chaucer and Shakespeare. Moving back to Florence in 1348, Boccaccio had a “center seat” for the “Black Death” (plague) that had begun to destroy the Country. He recorded his observations, which would be used for many centuries to document the spread and and effects of the disease. Also during this time, he wrote his classic “The Decameron”. The story centers around a central group of characters as they “escape” from a “plague stricken land” (and their ensuing adventures). Befriended in his later years by the Philosopher Petrach, Boccaccio almost was branded a “Heretic” by The Catholic Church for his “lectures” expressing consent for the excommunicated Writer Dante. He died in 1375 of an unspecified illness. 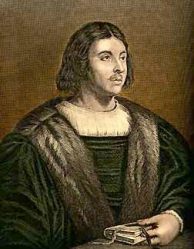