Formed by SS Leader Heinrich Himmler, The SS were a Protective Police Force and eventual enforcer of Nazi Germany's "Nuremburg Laws". The SS, noted for their fierce and fanatical loyalty to the Nazi "ideal". Many were chosen for Combat Units as well. With so many being used as such with the advent of World War II, Himmler needed to create a specialized Unit to monitor his control of Forced Labor (and eventual Extermination Camps). These Units were known as ''Totenkopf Commandos''. Officers and soldiers controlled every aspect of these Facilities. As such, they were identified by their own Banner. Based in part on the SS Standard, these Banners were Black cloth which ranged no more than 2-feet long and 6 to 8-inches in width.  Off centered, was placed a White Toten  (Skull and Crossbones). Closer to the Hoist, was place the SS insignia. These Banners were used from 1942 to 1945. 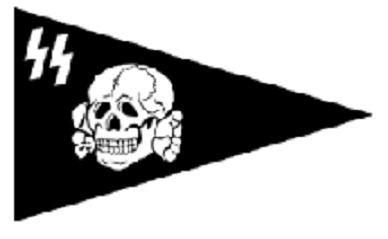