The German Reihnwerfer was a Self-Propelled ''Barrage'' Mortar, used by The German Army in World War II, starting in 1940. It was seen as a ''mobile (armored) multi-projectile'' weapon designed to be deployed against Enemy Infantry Forces.

A''semi (half)-tracked'' Armored Vehicle, The Reihenwerfer weighed over 15,000-pounds. They were 18-feet in length with a width of 8-feet. The height was 10-feet from the ground. Operated by (6), The Reihenwerfer was plated with .047-inches of Armor throughout.

The Reihenwerfer was powered by a (4) Cylinder Diesel Engine, capable of 19-mph on open terrain. The primary weapon was a Rear Bed Mounted, (16) fixed barrel Mortar System. These were in the 81mm range. The barrels were attached to a rotating plate which allowed for 360-Degree traversing. The Barrels could be adjusted (by hand) to 35 and 60-Degrees. The maximum range was 2-miles. A supportive armament was normally The MG-34 or 42 7.92mm Machine Gun (Forward Mounted).

Several Reihenwerfer's were also deployed to Normandy, France – in anticipation of an earlier Invasion by The Allies than was (1942). Although still present in 1944, it is unclear if they were deployed to any great effect. 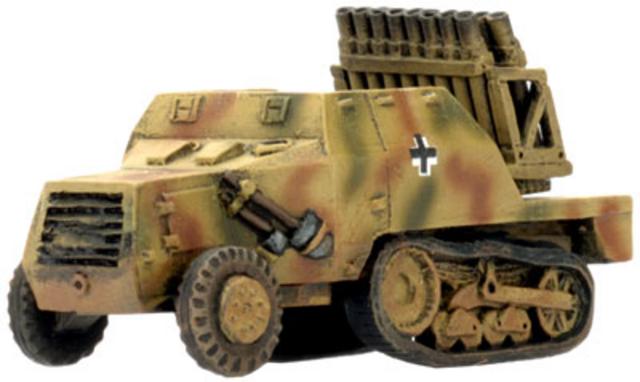