Designed to circumnavigate The Treaty of Verdun, The Nebelwerfer was "said" to be "Smoke Projector" for the concealment of Troop movements in the field. In reality, Germany envisioned The Nebelwefer deployed at first poison gas. It's effectiveness was quickly adapted to the new "rocket" technology, developed by Germany. Retrofitted as such, The Nebelwerfer consisted of (6), 51-inch barrels joined in a circular bunching. Mounted on a wheeled transport cassion, it was remote (wired and radio) fired. Launching high explosive rockets that ranged between 15 to 32cm, it had a 3,700 yard range. It's cyclic rate was 90-seconds with a 90 degree elevation. Field Marshall Irwin Rommel heavily used The Nebelwerfer in North Africa with create success. They were also deployed to Italy. The characteristic "whine" of its rockets, earned it The Allied nickname of "Screaming Mimi" and "Moaning Mini". Production ceased in 1945. 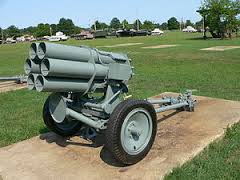