The ''Fire Police'' or ''Feuerschutzpolizei'' were formed in 1938 by Germany's National Socialist Party (Nazi). They were under the overall control of The Ordnungspolizei or National Police (under The SS). The Units formed were taken from Municipal Fire Brigades and small Magistrate Police Agencies. They were designed to assist Fire Agencies with crowd and traffic control, as well as securing Fire Fighting equipment and Station Houses. They became of more use when the constant Allied Bombing Missions began to destroy much of Germany's infrastructure from 1944-45.

The traditional uniform was based on The German Army Wehrmacht, but Blue. Green versions were also issued. Rank was based on The German Army. Protective Helmets were of The Stahlhelm design. The piping (or colors) used were a Pink Red. The Fire Police were also militarized. Several Brigades were sent with standard Wehrmact Units, used to put out fire in operational theaters and to serve as an impromptu Policing Force – ahead of The Gestapo. Although Fire Police Brigades are still an active First Responder in many Nations, The German version was dismantled after The War (1945). 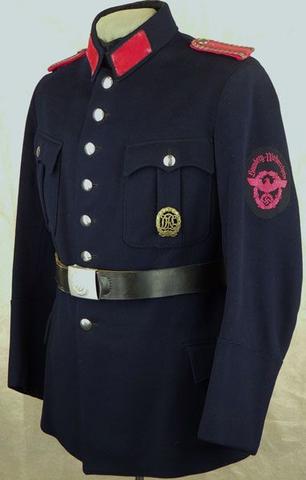