For Operators of Germany's Schnellboot's (Fast Attack Craft) – which were the equivalent to The US Torpedo Patrol Boats of The Pacific Theater in World War II, The Fast Attack Craft War Badge was a coveted device. Although part of The Kreigsmarine, few gave them much notice -m despite the fact that they were dangerous to operate and many of The Squadrons suffered high casualties.

Established in 1941. The Device was awarded to Operators of all Classes who had served in at least (12) engagements against an Enemy, or been wounded (which was immediate). In addition to Shipping, engaging Fortifications were also used in the criteria. Outstanding Leadership was also an immediate issue (more often to Officers). (8) ''Diamond'' War Badges were issued to German Fast Attack Boat Commanders.

Worn on the Left Breast pocket of the Uniform, The Device was an elongated Oval Wreath in Gold. The German Eagle was placed on the Top with a Swastika in it's talons. A Schnellboot was placed ''in motion on Water'' – in Silver. 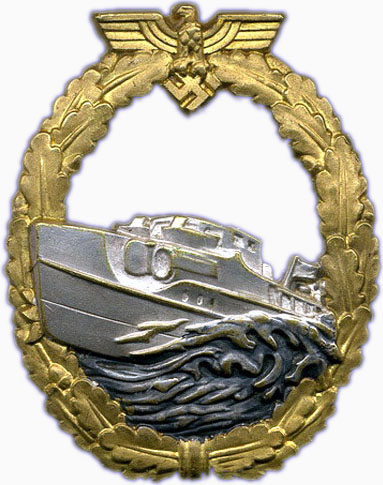