The German Army ''Afrika Korps.'' was a World War II Formation, created to assist Italian Allies with their Desert Campaigns in The Sahara (North Africa). The Corps. would eventually serve as a major Force to take up ''Stop Gap'' and Buffer Operations against first British and later British and American Forces attempting to remove German Occupation of The Region. Raised in March of 1941, The Afrika Korps. Was commanded by famed German General (Field Marshal) and Strategist Ewin Rommel. A skilled Armor Commander (and published Tactician) Rommel would earn the nickname of ''The Desert Fox'', due to his keen ability to not only anticipate his Enemies moves, but his ability to remove his assets from total destruction (to fight another day). The Korps was place subordinate to The Italian Desert Army in 1941. The Italian were outdated with regards to not only training and tactics by woefully undergunned. They have few ''German'' weapons imports, still relying on World War I Aircraft and rifles. The German Corps. Would soon become the primary source of Operations in North Africa.

Rommel and His Corps. would maintain both tactical and strategic control of North Africa from 1942 until mid-1943, when a lack of Panzer replacements and materials began to tell. In addition, Field Marshal Rommel was recalled to Germany (accused of participating in a plot to assassinate Adolf Hitler). He killed himself rather than face execution (1944) A succession of minor Commanders could not reform or effectively deploy The Korps. Afterwards. The pressure of British and American weaponry (Artillery and Aircraft), would prove too much. The once vaunted German Afrika Corps. Surrendered to British Forces in 1943. The typical German ''Afrika'' soldier was equipped to survive in a hostile, desert environment. As such, light colors (khaki tan and yellow) – were the official ''colors'' of The Korps. Lightweight cargo shorts and short-sleeved shirts were a must. The Colonial Pith Helmet (for regular duty) was preferred, but of course The Stalhhelm was worn (in a yellow-tan color scheme).

Weaponry suffered due to the sands of The Sahara. As such most German small arms suffered from such exposure, and cleaning (almost hourly) became the normal. The same would be said for the vaunted Panzer Tank and a wide vareity of wheeled vehicles used to move equipment and for transportation. The Corps. was never authorized ''official'' Colors (Flag), Those used were self-created Unit Flags, the kind already in use by The German Wehrmacht. Coloring applied to such Organizational Flags were initially Black and White, Quadrant Pattern. The Upper (far Left) Canton featured The Korps. Insignia, which was a Desert Palm with a Swastika superimposed over. Divisional, Corps. etc. Numerical identifiers were placed in the Lower (far Right) Canton. Command Pennants were Tan (light Brown) in color and bore Command insignia indicative of Rank or Office. 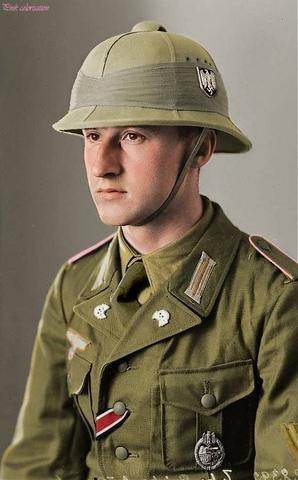