Possibly one of the most iconic of the early rapid firing weapons and precursor to the Machine Gun, The Gatling Gun was designed by inventor Dr. Richard Gatling in 1861 (in his attempt to end The American Civil War more quickly). It was the first rapid fire gun deployed in the field by The Union Army and would continue in use to the early 19th Century. The weapons operation focused on a multi-barrel cyclic and synchronized firing/reloading system. As the Gatling cycled a round, it would be timed to drop into the barrel chamber (allowing for ignition via percussion caps). By using a hand-crank (and maintaining a steady consistent pattern), multiple barrels would (in turn) fire and twist away from the firing mechanism. This was also innovative from the sense that barrels did not overheat excessively (as with other designs). Shells were placed into a hopper and were gravity fed.

The Gatling Gun was capable of up to 200 rounds per minute. Crewed by 4 soldiers, The Gatling weighed 60 pounds (without gun carriage). Each barrel was roughly 30-inches long. It was originally chambered to fire .58 caliber shells (but would be re-fitted for subsequent shells developed later). For all it's promise, only 12 Gatling's were initially produced (and without much favor within The Union Army). The weapon saw limited service in The Civil War and were not much used until 1866. A popular weapon during The Indian Wars, many were deployed with Army commands in the West. A battery of Gatling's was sent with future US President (then Colonel), Theodore Roosevelt and his “Rough Riders” for use in The Spanish American War. Many Gatling's were exported overseas. By 1911, most Gatling Guns had been replaced by the gas-operated and water cooled rapid fire weapons seen in the trenches of World War I. 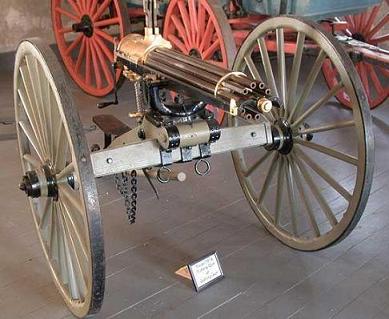