Originally developed by The French Army in the mid-16th Century (when The Imperial French Army was identified Nationally as “The Ancien Regime”, The “Galon d’anciennete” were used to identify seasoned Veterans of an Army. Originally, The Galon was a Gold, worsted Braided “Knot” worn attached to the Right Shoulder of the Outer most Uniform Garment (Coat). By the 18th Century, The Galon design was refined under Emperor Napoleon Bonaparte. The Gold Knot was replaced with a series of Red Chevron Stripes which were sewn onto the Left Sleeve of a Veteran’s Uniform Coat. Placed mid-length, in time – The Galon was lowered closer to the Cuff of the Uniform Sleeve. Eventually, additional Stripes were affixed (normally in Gold or White), to denote “Combat” Service. In Napoleon’s “Grand Armee”, 1 Red Stripe denoted 10-15 years of Military Service, with 2 meaning 15-20 years. 3 Chevron designs were used to denote 20-25 years. In known rare instances, some Soldiers wore 4 (for 30 or more years). French Soldiers nicknamed them “Brisques” or “Breaks” – to denote “One Who Has Breaks” (referring the spacing between The Stripes). The initial design would continue in The French Army (with obvious modifications) to today. The idea of The Galon would be adopted by most Armies in The World as a way of identifying Veteran Soldier. These would be called “Service” or “Seniority” Stripes. 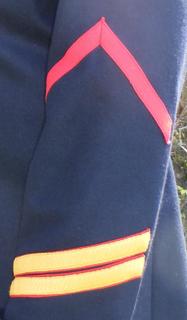