Designed to operate if The Indian Sub-Continental Coastal waters ( and seen as far as South Africa, later) - The Gallivat Class of ships were small to medium fast attack ships indicative of many Regional Pirates and Privateers. Designed to use both sail and oar, they were typically between 20 and 40 feet long and featured twin Masts  (rigged with a Lateen sail configuration). Normally between 50 and 100 tons displaced, The Gallivat could mount between 3 to 10 cannon (mostly Swivels). A scourge of The British East India Trading Company, these vessels were able to strike fast and escape just as easily. They could switch to a crew operated oaring system in case of lack of wind. They also preyed on the Slave Trade off Africa. Popular in the 18th thru 19th Century, Gallivat were obvious prey for the larger Warships eventually used to rid the Seas of them. 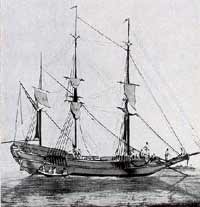