The Galleass-Class of ships were developed in the 15th Century. These were smaller than The Galleon ships (used as Warships of the Era). Used mostly for cargo and trade duties, they featured 3-Masts with a Fore and Aft Castle. Galleass ships used both human and wind power (and frequently both). They were slender and long and known for their speed. Galleass -Class ships also featured permanent armament on their Upper Decks. Although the cannon used was of light or low poundage (so as to not effect the speed factor). The Galleass was a favored “fast attack” ship for the famed Barbary Pirates of the mid-16th Century. They displaced usually around 150 to 200 tons. They differed in ship size from 75 to 125 feet long with normally an 18 to 25 foot high Beam. During The Battle of Lepano (1571), the Galleass-Class of ships was used exclusively by The Holy League Navy (with victory over The Ottoman's resting squarely on The Galleass usage). By the late 1660s, Galleass ships were replaced by the larger and better armed Galleon-Class (and related) warships. 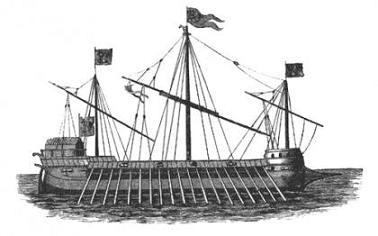