The term “Fusilier”, is associated with the advent of gunpowder and Firearms. A type of Infantry designation, Fusiliers would evolve into an Elite status. The first use of the word is linked to the French Army of the late 17th Century. “Fusil” was seen associated with “Flintlock”. Early Firearms, such as The Matchlock and Snaplock, were somewhat unreliable. Damp powder. Coupled with problems ignitions, would lead to the next step in Firearms evolution – The Flintlock. First seen in The French Army of 1670, The Fusilier exclusively used the newer weapon, when Pike was still integral to Infantry Formations. Much like The Grenadier, they wore distinctive Uniforms. They too adopted  (at first), a kind of “Seal Skin” Cap with a 9-inch Mitred Hat. These were covered in furs. When England adopted The Fusilier, such Hats were made of Raccoon Pelt. The distinctive use of The Hackle  (a type of plumage), differentiated their Hats from those of The Grenadier.

Uniform color was a matter of Regional requirements. France used dark Blue while England, it’s Scarlet. Facings were often Buff or Tan. Their distinctive identifier was again, similar to that of The Grenadier. A “Bomb with Flame” design, it included an engraving of St. George. An early task for The Fusilier was to protect or guard Artillery from attack. They would slowly be adapted into “Shock” or “Light” Infantry. Most European Countries deployed a form of Fusiliers by the 19th Century. Still seem in use (by name) in some Modern Armies, The Fusilier fills the role of a rapid response or Light Infantry Soldier. 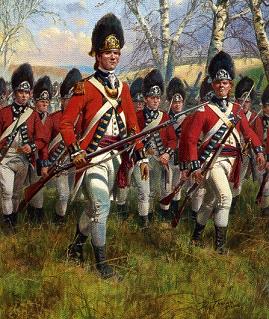