Another form of French North African raised Troops, The Tirailleurs were also raised from indigenous Peoples of The Region. Classified as “Light Infantry”, their origins began with The French Imperial Army of Napoleon Bonaparte in the early 19th Century. At this time they were composed entirely of Frenchmen and dressed as basic Napoleonic Infantry (save the Yellow colored Uniform facings). Similar to The Voltigeurs, The Tirailleurs were used as “Skirmish Infantry”, designed to engage an Enemy ahead of a Main Force. Due to their need for speed, they carried only the most basic of standard Infantry equipment. They were disbanded after the final fall of Napoleon, only to be “reborn” as indigenous Forces in North Africa in the mid-19th Century. Still used as “Light Infantry”, The Tirailleurs were styled after the popular Zouaves, using various Uniform color variations depending on Region.

Like most North African Units, The Tirailleurs were commanded by White French Officers and Non-Commissioned Officers. And similarly , thus Policy would change to include various Ranks and Commissions going to certain chosen indigenous Men. Still retaining their Zouave style, Tirailleurs wore a variety of Headgear. These included Turban, Fez and Kepi. Weapons remained based on their Light or Skirmisher traditions. Tirailleurs fought with great distinction in the Crimea and Southeast Asia. During World War I, they took heavy losses at The Battle of Gallipoli. Due to their Uniforms, they were nicknamed “Turcos”, due to the similarities with The Ottoman Turks.

Not as frequently deployed during World War II, they saw some limited action against The Germans, but most had either been disbanded or merged into other Units. By the end of French involvement in Southeast Asia in the late 1950s, all but one Tirailleurs Regiment were disbanded. The surviving Unit in The French Army is a Ceremonial Regiment, still espousing it’s Zouave appearance. 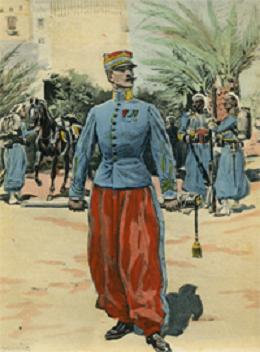